John Anderton: Why don’t you cut the cute act, Danny boy, and tell me exactly what it is you’re looking for?
Danny Witwer: Flaws.
John Anderton: There hasn’t been a murder in 6 years. There’s nothing wrong with the system, it is perfect.
Danny Witwer: [simultaneously] – perfect. I agree. But if there’s a flaw, it’s human. It always is.

OK this quote might be a bit dramatic for an article about post installed anchors (PIA’s) but it is true none the less…and I just love that movie.

Do you know why manufacturers offer lifetime warranties on their products? Is it out of the kindness in their hearts? It would be nice if that was totally true, but manufacturers know that they will get a reliable product almost every single time one comes off the assembly line. Why? Because the products are made by machines. When you input the correct information into a computer or a machine it will produce the same output every time. Machines don’t make mistakes, people do.

In my last article titled “How to select the right PIA”, I mentioned how PIA’s were never taught in school. People learn what they learn along the way and do the best they can to understand them. When they need a PIA, a contractor, engineer or architect will most likely pick the anchor they are most familiar with. But old reliable may not be the right anchor because it was made with a particular application in mind. Your connections are critical and mistakes can be costly. So as the Grail Knight said in Indiana Jones and the Last Crusade(another great one!) “…choose wisely…”

And what is the definition of “failure” anyway? The following is directly from ASTM E488 “Standard Test Method for Strength of Anchors in Concrete and Masonry Elements”.

2.1 Failure of the structural member in a shear-cone mode.

2.2 Failure of the structural member with or without cracking that radiates outward from the location of the anchorage device, resulting in a pullout of the anchor.

2.3 Pullout of the anchor. (This will only happen to mechanical anchors, BC)

2.4 Failure of the bond between the anchor and the structural member (This will only happen to adhesive anchors, BC). Displacement failure is evidenced by continuous displacement associated with a constant or decreasing applied load.

2.5 The fracture of any component of the anchoring device including hardware accessories shall constitute failure.

Manufacturers test the heck out of their anchors and materials have become extremely reliable. When they say it should fail at a particular load, in a particular base material, it will pretty much fail that way. So if PIA’s are tested so much, and are so predictable, then why do they sometimes fail during testing? Here are the top 10 reasons from my experience that post installed anchors fail (in no particular order). Drum roll please…

The wrong anchor was selected for the particular base material. Wedge anchors are meant for concrete, not brick. A 6 inch sleeve anchor should not be used in 4 inch brick! The steel is too thick for the standard powder actuated fastener selected (asking it to go more than 1/2 inch is a big stretch). Know your anchor and the applications it was made for. Read the documentation from the manufacturer. Find out where it can and more importantly cannot be used. And finally, use common sense.

The person selecting the anchor thinks the capacity of the base material or the anchor is greater than it really is. You can’t get blood from a stone. Enough said.

3. A Hybrid adhesive meant for a hammer-drilled hole was used in a cored hole. It’s very interesting to see anchors pull out like popsicles but it is very costly. Epoxy adhesive anchors have a lower viscosity and can penetrate into the concrete unlike hybrid adhesives that rely on a rough hole for friction and micro-keying.

4. The holes drilled for adhesives were not cleaned properly. If there is dust in the hole, the adhesive will stick to the dust. Dust is not nearly as sticky as glue ;o) You need a brush! Most of the dust gets caked onto the side of the hole which is where it gets all of the bond capacity. Vacuuming the hole just cleans the bottom. Using a manual pump is cheaper, doesn’t need electric power and works better than a vacuum. Using compressed air is the best and is required for all adhesives used with ICC-Acceptance Criteria, AC 308, Acceptance Criteria for Post-Installed Adhesive in Concrete Elements. 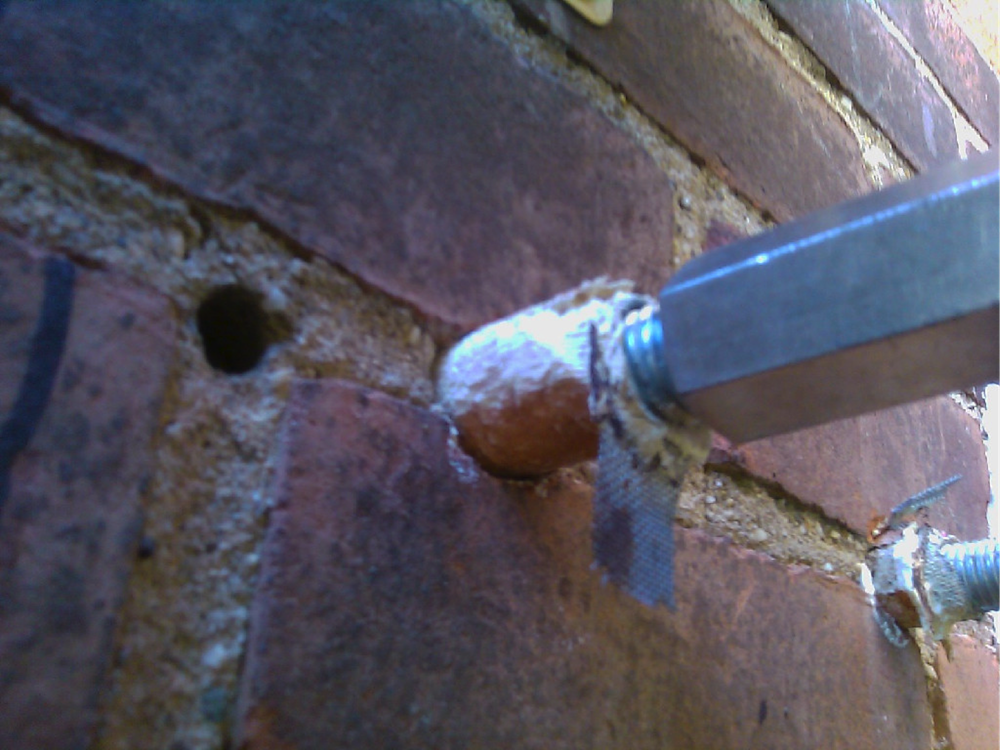 6. The mechanical anchor was not torqued enough. Torquing the expansion anchor causes the wedge shaped portion to slide up through the sleeve at the bottom. This expansion force creates the friction and micro-keying. If you don’t torque it enough your capacity will be less than you expect. (BTW – a small displacement is ok for these anchors).

7. The adhesive anchor was torqued too much. Most adhesive anchors are meant for two types of loadings. Tension and shear. Over-torquing the anchor can break the bond between the adhesive and the base material. Without the strong bond your capacity is greatly reduced.

8. The stone or brick pulls out from the wall. This is one failure mode that can get you in trouble. Anchors set and tested in brick should have a load bridge large enough to allow the brick or mortar to fail if it is the weakest link. If the bridge is too small it can appear that the anchors’ load capacity is greater than it really is.

9. The adhesive was left out in the cold… or the heat! Some adhesives contain water. If the water is frozen or evaporates, it will not mix properly giving you interesting and very inconsistent results.

So the moral of the story is, when in doubt call someone who knows about the anchor and ask questions. Just tell them what you are installing and ask if you’re doing it right. If you ask the right person they will even give you some tips. Also, read the directions. I still do! There are so many different anchors and it’s hard to have everything committed to memory. Taking a few minutes to read the directions can save you a lot of time and money.